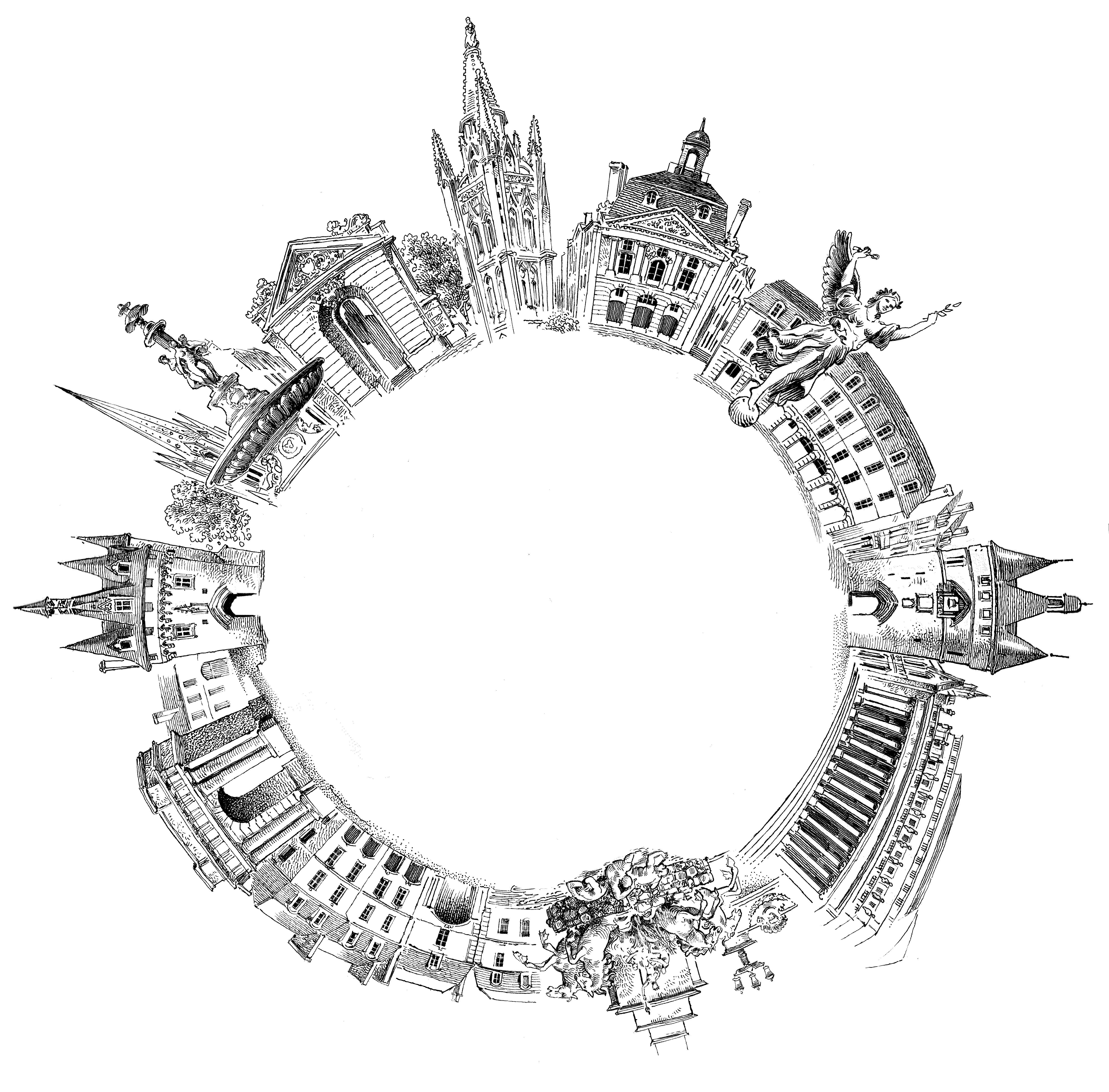 
Welcome to our website, we are delighted with your visit, the city of Bordeaux deserved our interest in it, we combined its architecture and its gastronomy this association gave birth to the wines THE DIPLOMATE which corresponds to "beautiful", "good" and "tasty"! This wine will transport you to the vineyard between the two banks and in a spirit of purity thanks to the bio which is synonymous with renewal for the wine.
Preservation of our biodiversity is essential to our wines’ quality, it is the beginning of a great revolution for consumers.

The name "Diplomate" comes from Sir KENELM DIGBY, an English diplomat who invented the modern Bordeaux glass bottle. At first, it looked more like a flattened sphere to ensure a good sitting, with a relatively long neck for a good grip. The shape of the bottles evolved and became more cylindrical for an easier storage and transportation.

This wine was created especially for the traditional circuit, the wines were selected by our teams with our winegrower partners Our work will allow you to taste all the great Bordeaux appellations. As climate change is pushing men to rethink his practices towards nature, we wanted - through Diplomate - to provide proof that it is possible to pamper wines while preserving our terroirs. Organic wines will allow nature to become what it once was: freshness, purity and authenticity (Today the share of certified organic estates in the Bordeaux region is 8%). 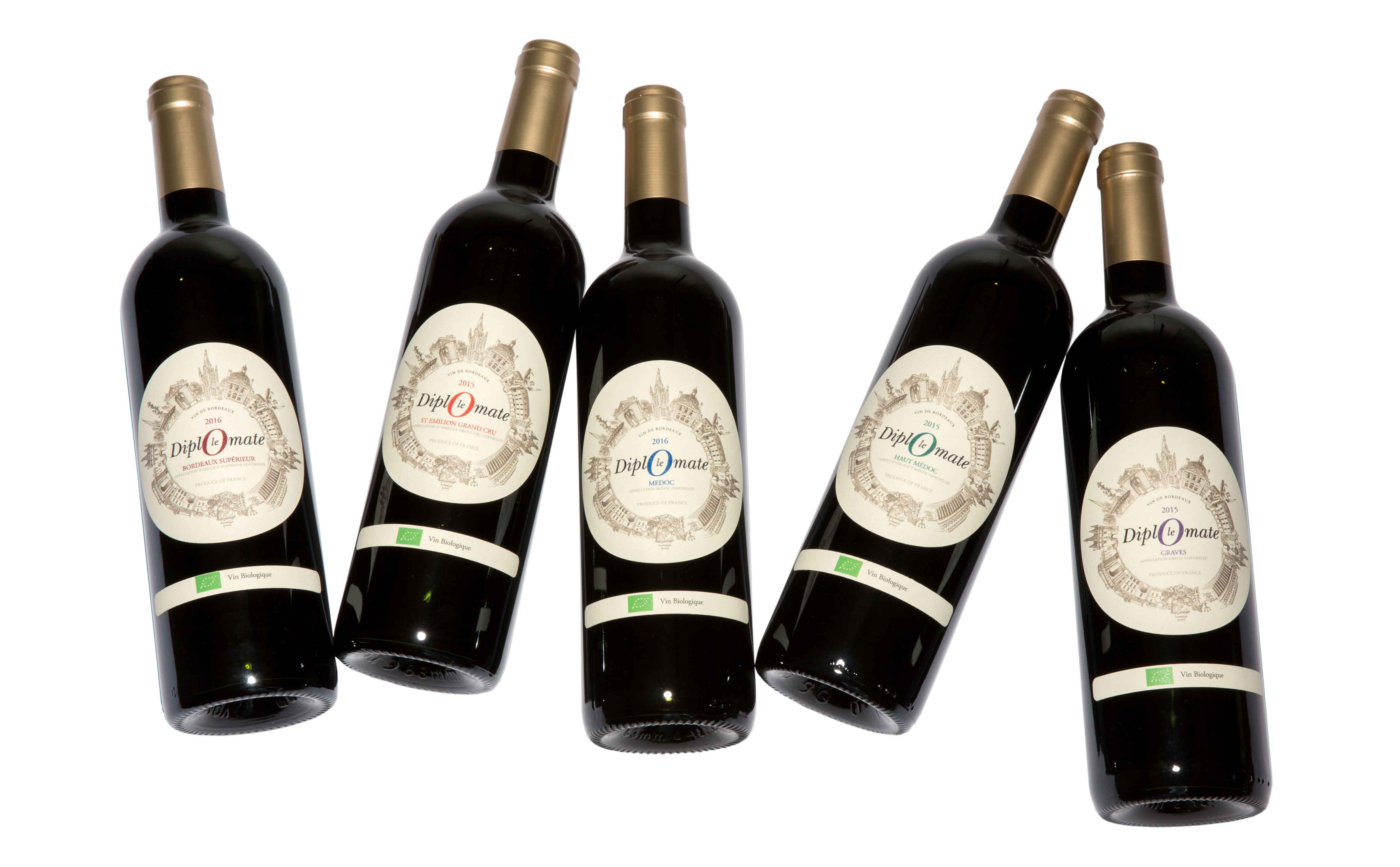 This label allows us to highlight the main buildings of the city of Bordeaux that will shine for centuries to come. You will participate in the preservation of our ecosystems, and become the greatest ambassador for our wines. The name "Diplomate" can stand for the men and women of our beautiful region that is the Great Aquitaine.

Our organic wines Le Diplomate will make you live an exhilarating journey between the two banks of Bordeaux, the left bank with its dominant Cabernet Sauvignon and the right bank with its Merlot.

Each wine and therefore each terroir corresponds to a moment of tasting and sharing. 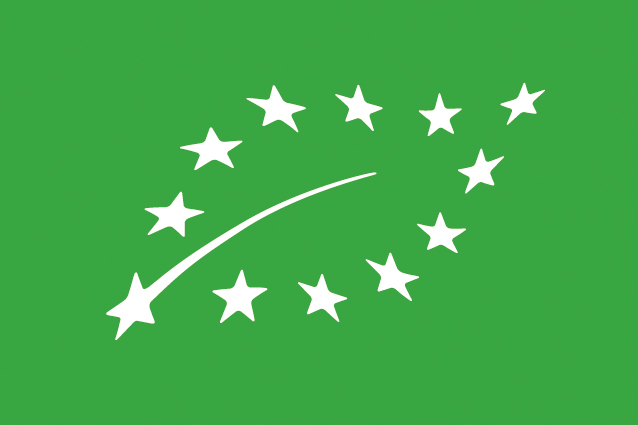 The name organic wine has officially existed since 2012, with the recognition of organic wine by Europe. Previously, there was no actual "organic wine", but

Elaboration of an organic wine:

Organic farming is subject to specifications prohibiting among other things the use of fertilizers, synthetic pesticides, or chemicals (pesticides, insecticides, fungicides, fertilizers, etc.). The winemaker who develops an "organic wine", tries to maximize the defenses of the vine to limit treatments. However, against the most frequent diseases (mildew, powdery mildew), treatments with sulfur and Bordeaux mud are used most of the time. This management of the vineyard takes time: that is why producing an organic wine requires 20% to 30% more labor than conventional farming.
A minimum of 3 years are necessary to be certified as organic. During these 3 years, the vineyard is in an organic conversion: it must respect the regulations on the organic products, it is followed by the certifying body which ensures the respect of these regulations but the wine is not considered as " Vin bio " yet. 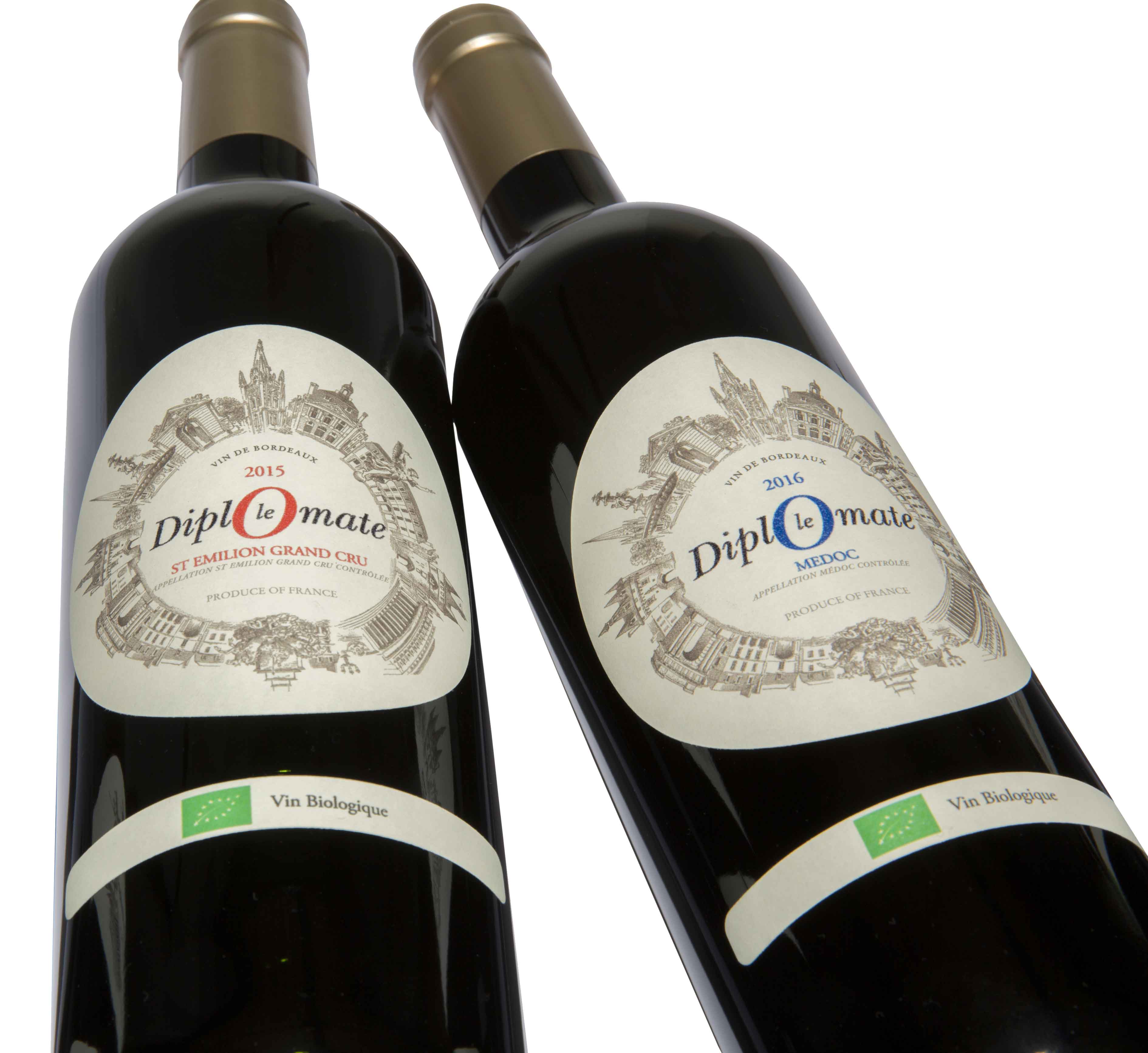 Concerning winemaking, the winemaker with his certified organic vines does not have much more constraints than the conventional winemaker as the European Union has allowed the use of exogenous yeasts and almost all the conventional vinic practices. Sulfur is allowed at slightly lower doses than in conventional practices(30 to 50 mg less). It is wrong to think that organic wine is a wine without sulfur. However, a large number of winemakers who have an organic vineyard , make sure to keep it as natural as possible in order to highlight all the work in the vineyard.

The certifying bodies are in charge of controlling the vineyards on behalf of the public authorities and making sure the French and European regulations concerning the bio are respected. ECOCERT, created in 1991, is the most widespread organization: it monnitors 70% of “organic” companies (production and processing) in France and 30% in the world. The majority of organic wines are certified by "Ecocert". 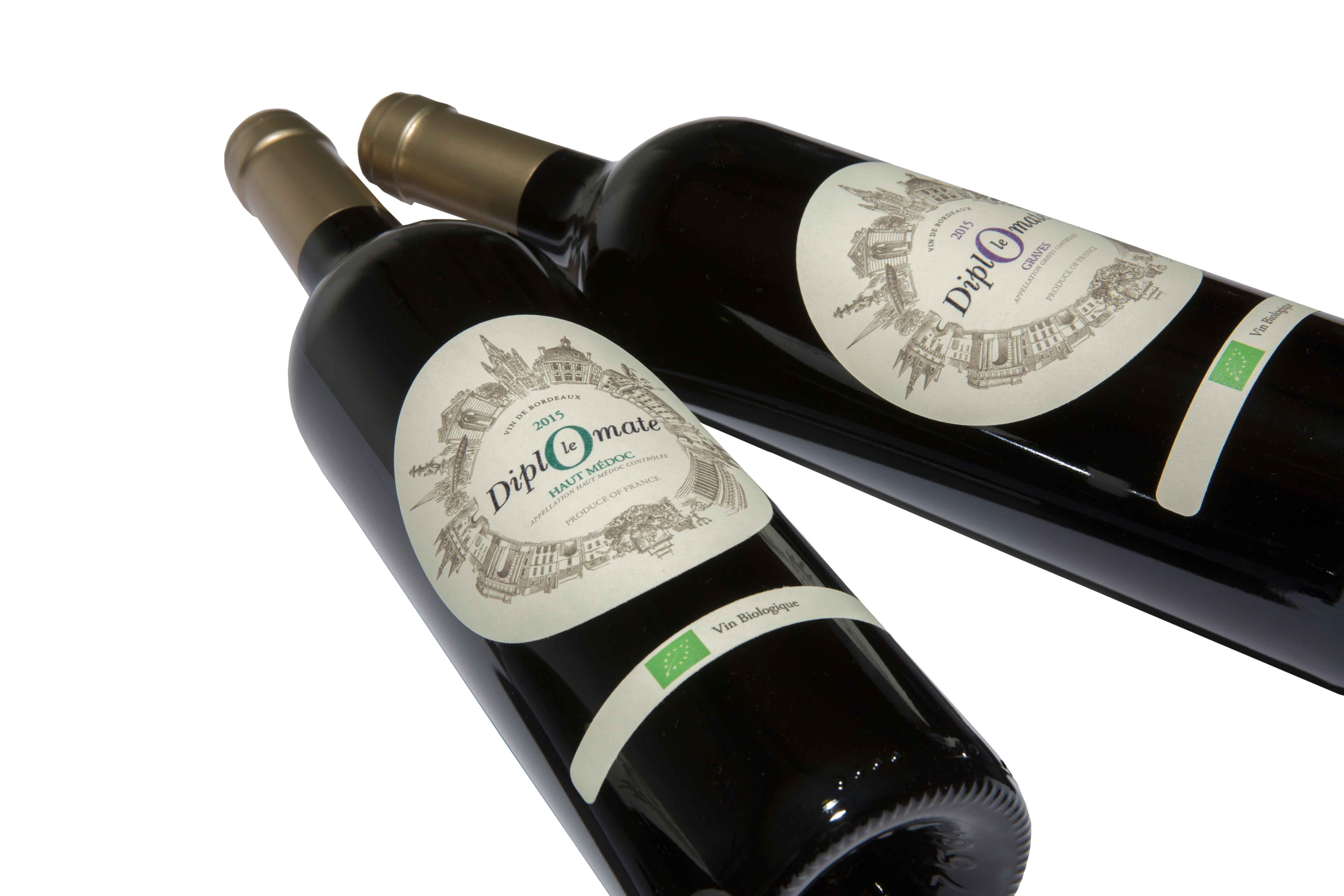 AOC Bordeaux Supérieur is a regional AOC. Like the AOC Bordeaux, the wines of this appellation can also come from all the Bordeaux wine region. The average production is 450,000 hl / yr over 10,000 ha. The requirement of 9 months minimum aging makes these wines more powerful than Bordeaux, the grape varieties that can be used are Cabernet Sauvignon, Merlot, Petit Verdot, Malbec and Cabernet Franc.
By choosing this name we are in the simplicity and efficiency of what is done in the region, that is to say the conviviality and the generosity, a wine that can be drunk alone or as an aperitif, on meat or with a barbecue. 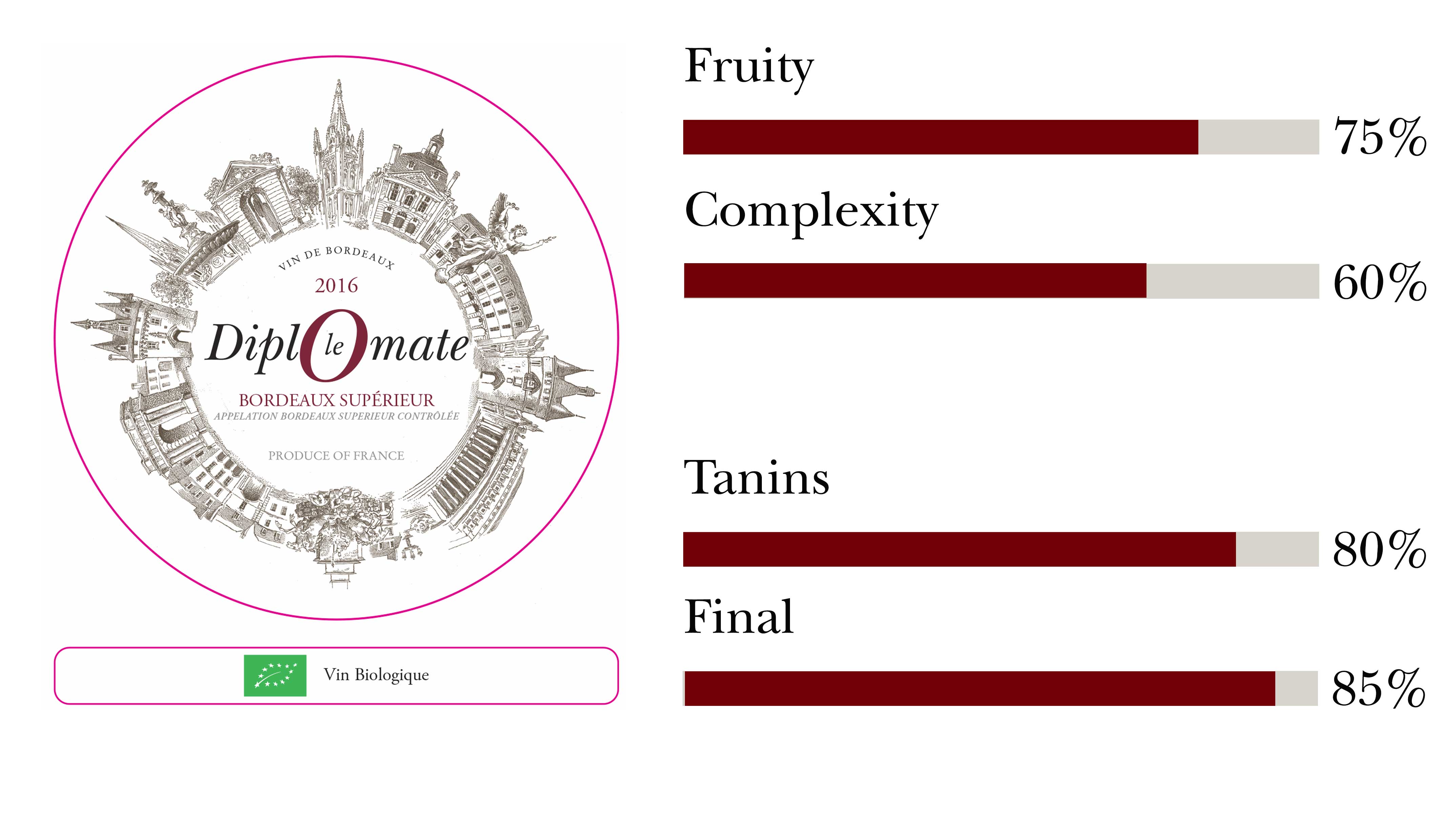 The AOC Saint-Émilion Grand Cru is located on the right bank of Bordeaux, the mention "grand cru" is awarded according to more stringent criteria than those of the appellation Saint-Émilion. The yield is limited to 40 hl / ha (instead of 70 hl / ha for a classic Bordeaux) and the breeding is 12 months minimum. The surface is 4,000 ha with calcareous, clay-loam and sandy soils. The authorized grape varieties are Cabernet Sauvignon, Merlot and Petit Verdot, and about 150,000 hl of red wine are produced each year. There is a classification for Saint-Émilion Grand Cru: A, B, classified growth and grand cru.
Starting with this appellation, the wine will be perfect with a delicate and refined meal such as a carpaccio or a tender piece of beef. 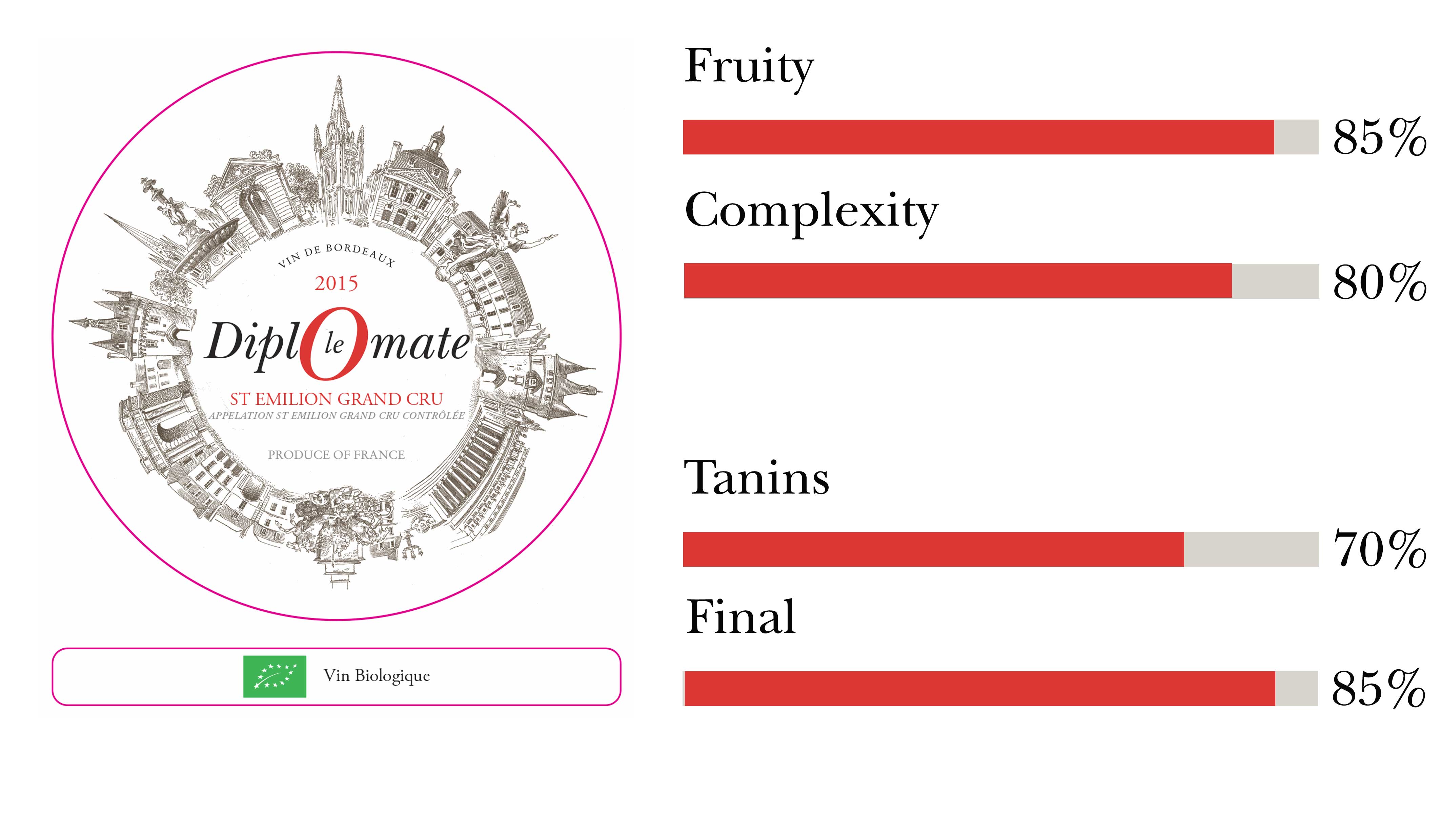 
This appellation is the northernmost appellation of Bordeaux, it covers 5,800 ha and produces 285,000 hl of red wine a year. The soil consists mainly of gravelly ridges, the grape varieties used are Merlot, Cabernet Sauvignon, Cabernet Franc Malbec and Petit Verdot. The Médoc, meanwhile, will be fuller with a good length, marrying perfectly with red meats, dishes in sauces and grilled meats. 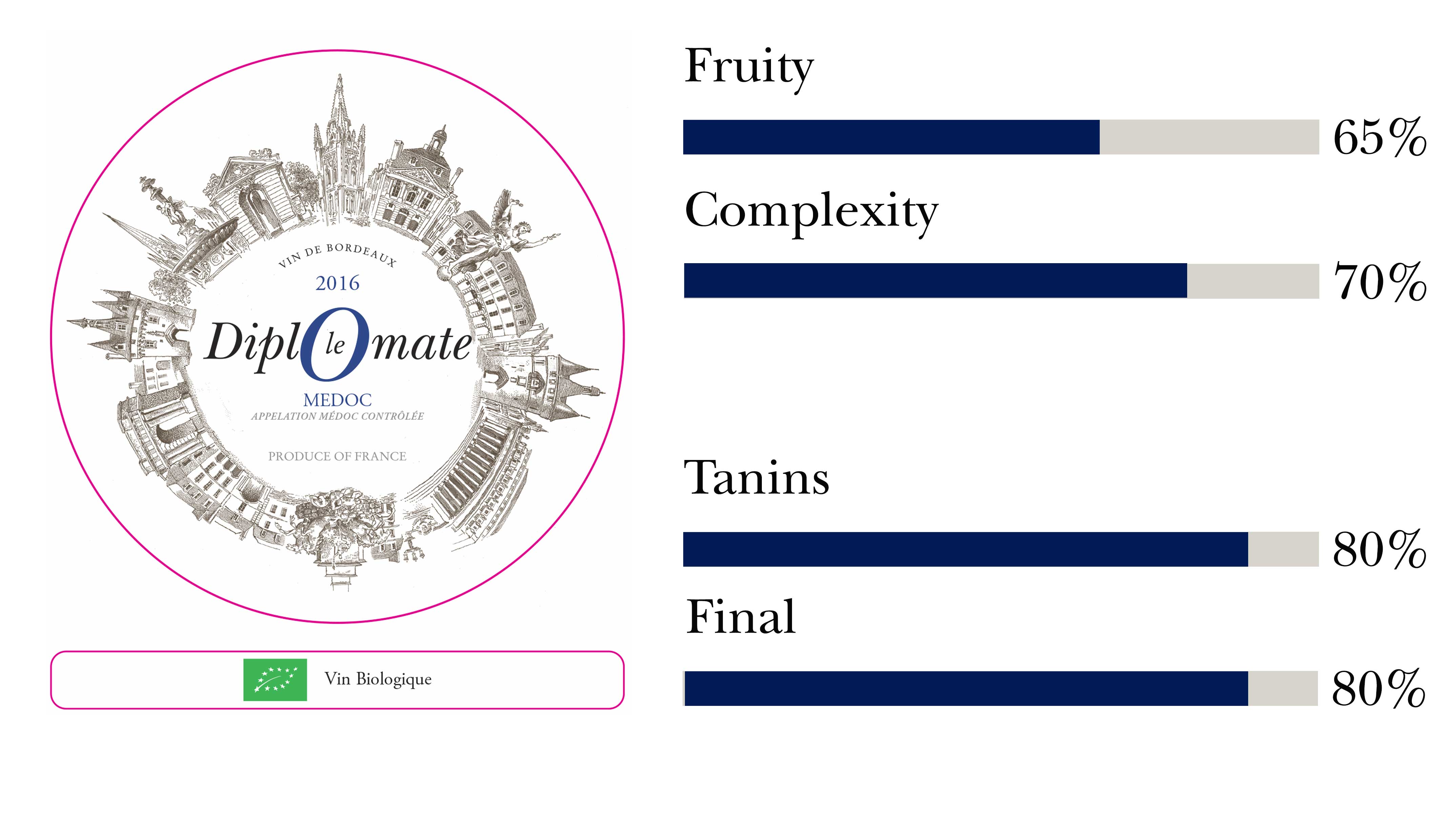 
The Haut-Médoc AOC is located to the south of the Médoc appellation, it covers 4,800 ha and produces 220,000 hl / year of red wine. The majority of grape variety is Cabernet Sauvignon, but Merlot, Petit Verdot, Cabernet Franc and Malbec are also grown on gravel and clay-limestone. In the continuity of the Médoc, Haut-Médoc will have more matter and elegance with a slightly vanilla finish. The agreement will be ideal with lamb or game. 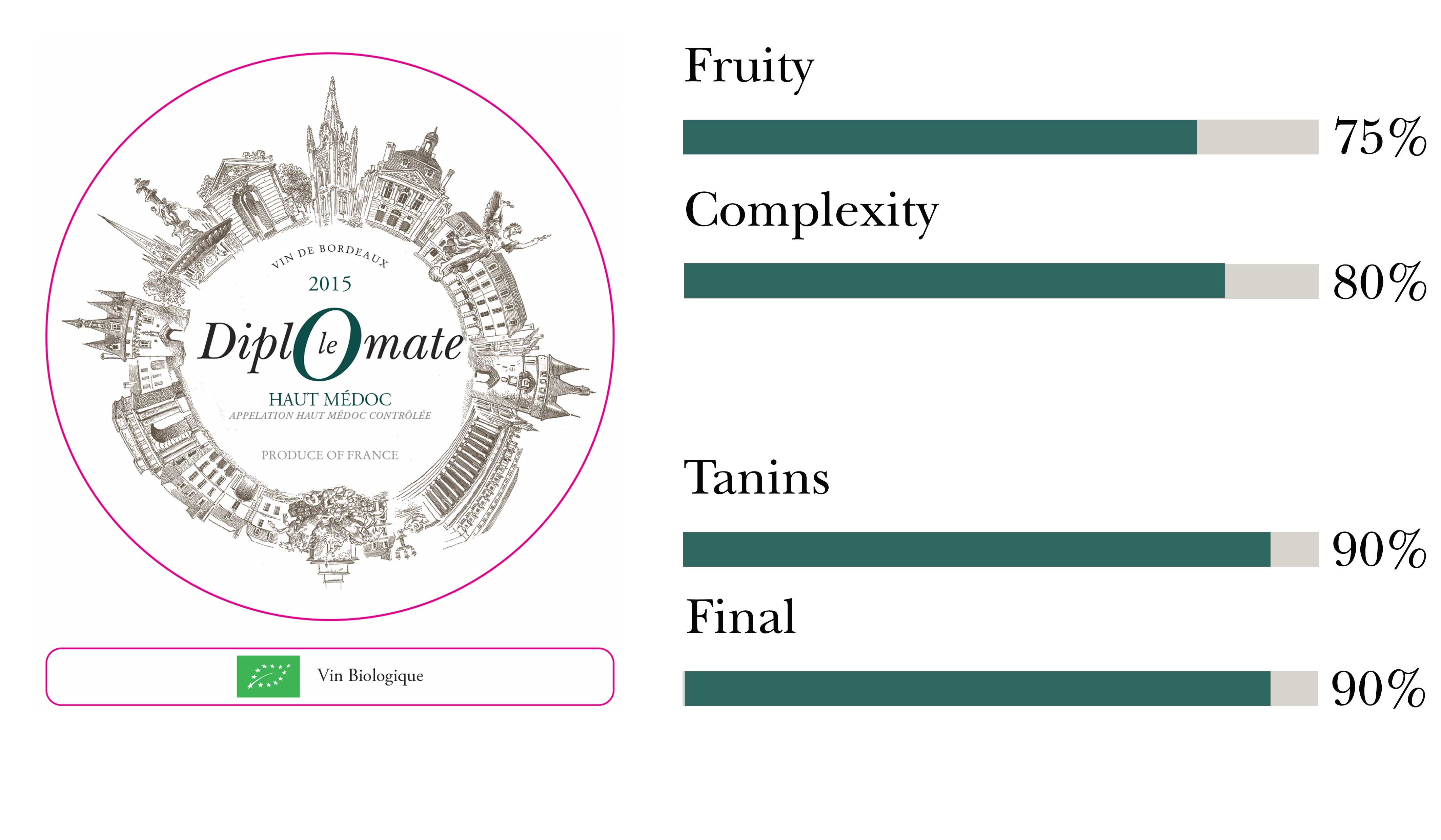 This AOC is located in the south of Bordeaux, the terroir consists of a gravelly strip composed of pebbles, clays and limestones starfish. This appellation of 3,500 ha produces around 163,000 hl of red and white wines each year. The blend is balanced with about 50% of Merlot and the rest is lade of Cabernet Sauvignon or Franc. The wines of Graves are very round and fruity with a nice acidity, paired with salads, poultry, cold meats and cheeses. 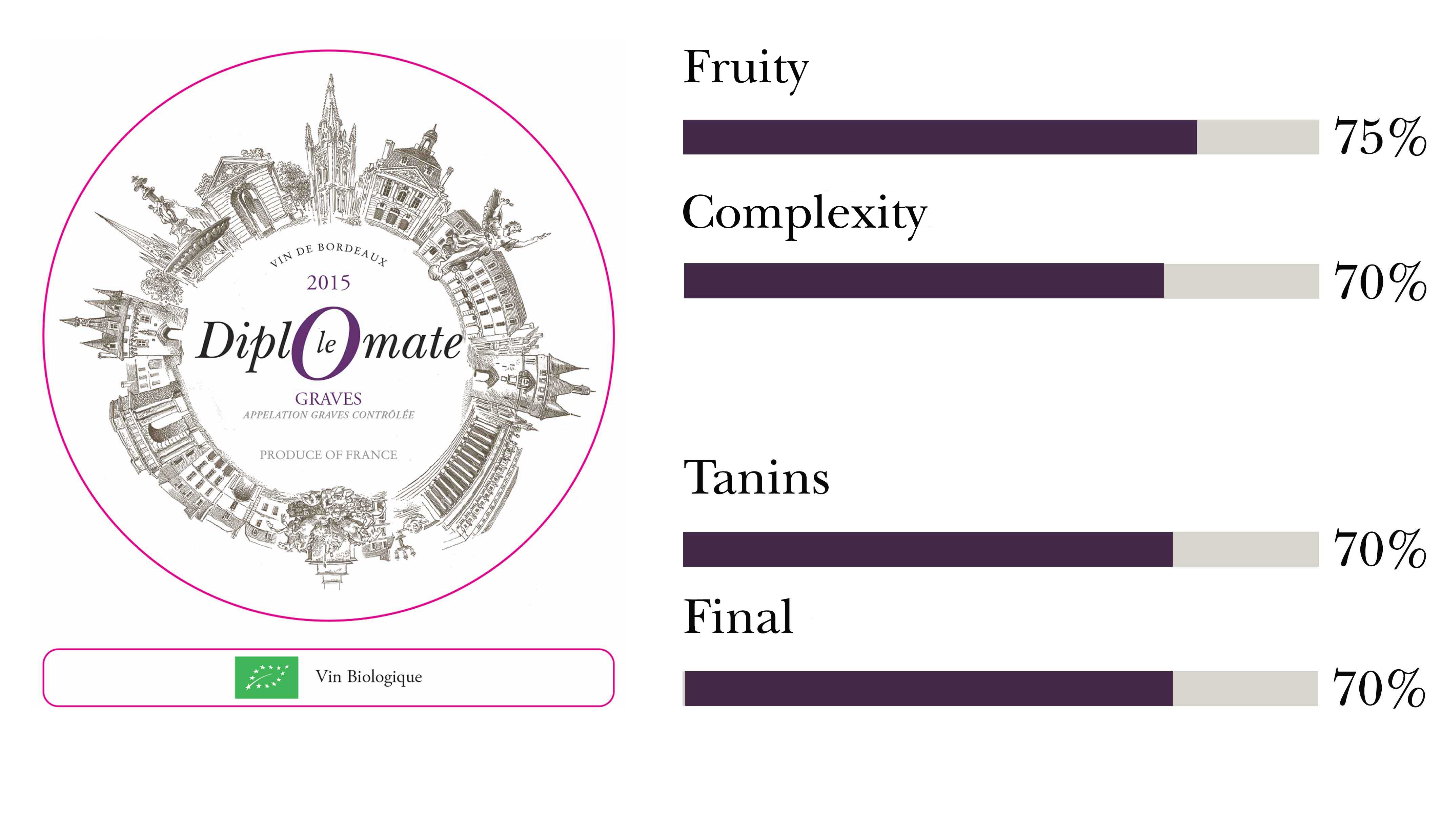 The foundation of the city of Bordeaux dates back to the 6th century BC. In -50 BC with the arrival of the lieutenant Roman Publius Crassus the urbanism is developed, the plans of the streets Sainte-Catherine, Porte Dijeaux, St Remy, and the course of the Intendance are already drawn. It was also at that time that vines were brought from the Piedmont-Pyrenean foothills. 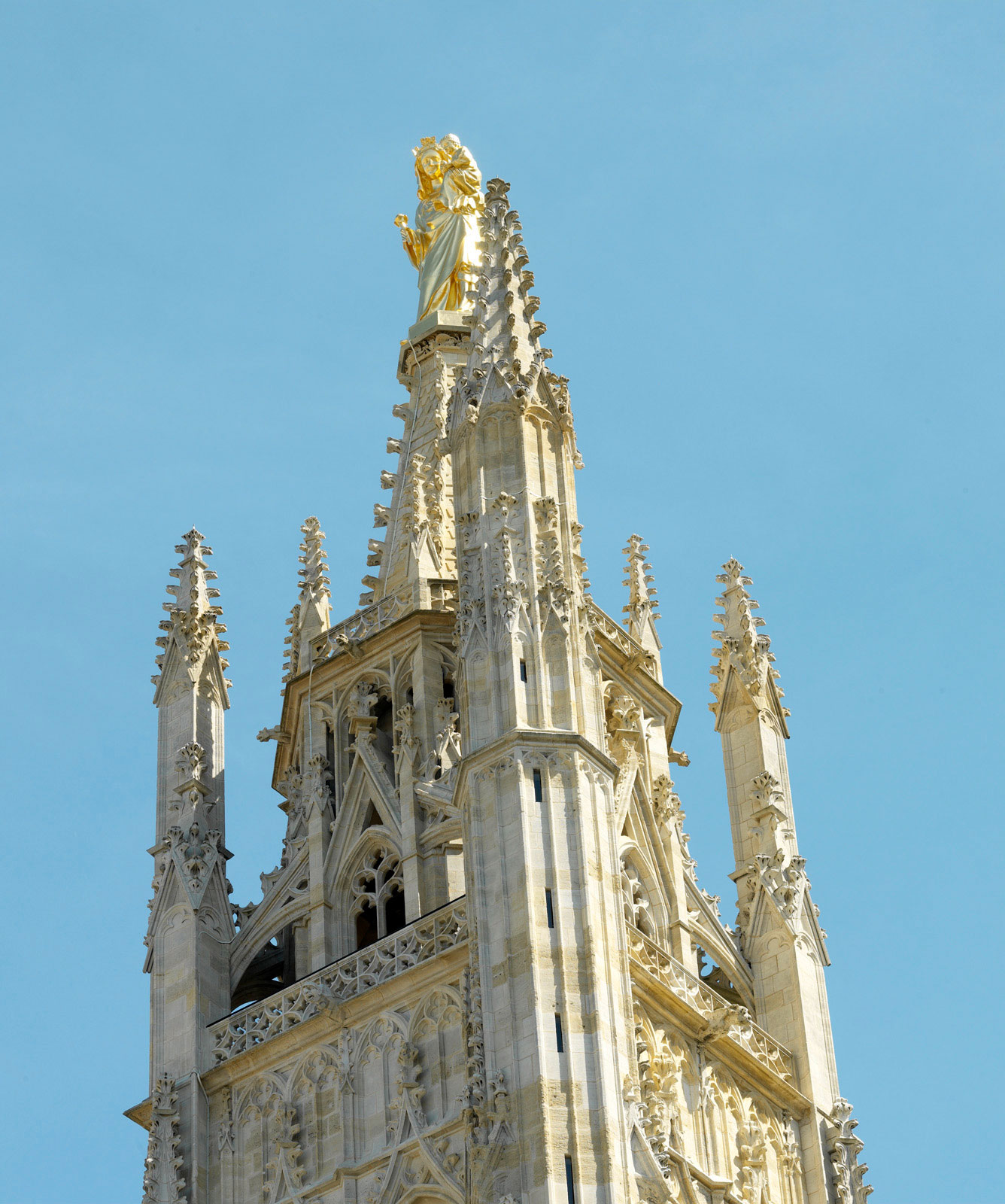 The foundation of the city of Bordeaux dates back to the 6th century BC. In -50 BC with the arrival of the lieutenant Roman Publius Crassus the urbanism is developed, the plans of the streets Sainte-Catherine, Porte Dijeaux, St Remy, and the course of the Intendance are already drawn. It was also at that time that vines were brought from the Piedmont-Pyrenean foothills.

Formerly named Place Royale, Place de la Bourse was built by the architect of King Anges-Jacques Gabriel between 1730 and 1755. We can find there the Customs Museum and the Chamber of Commerce and Industry of Bordeaux. 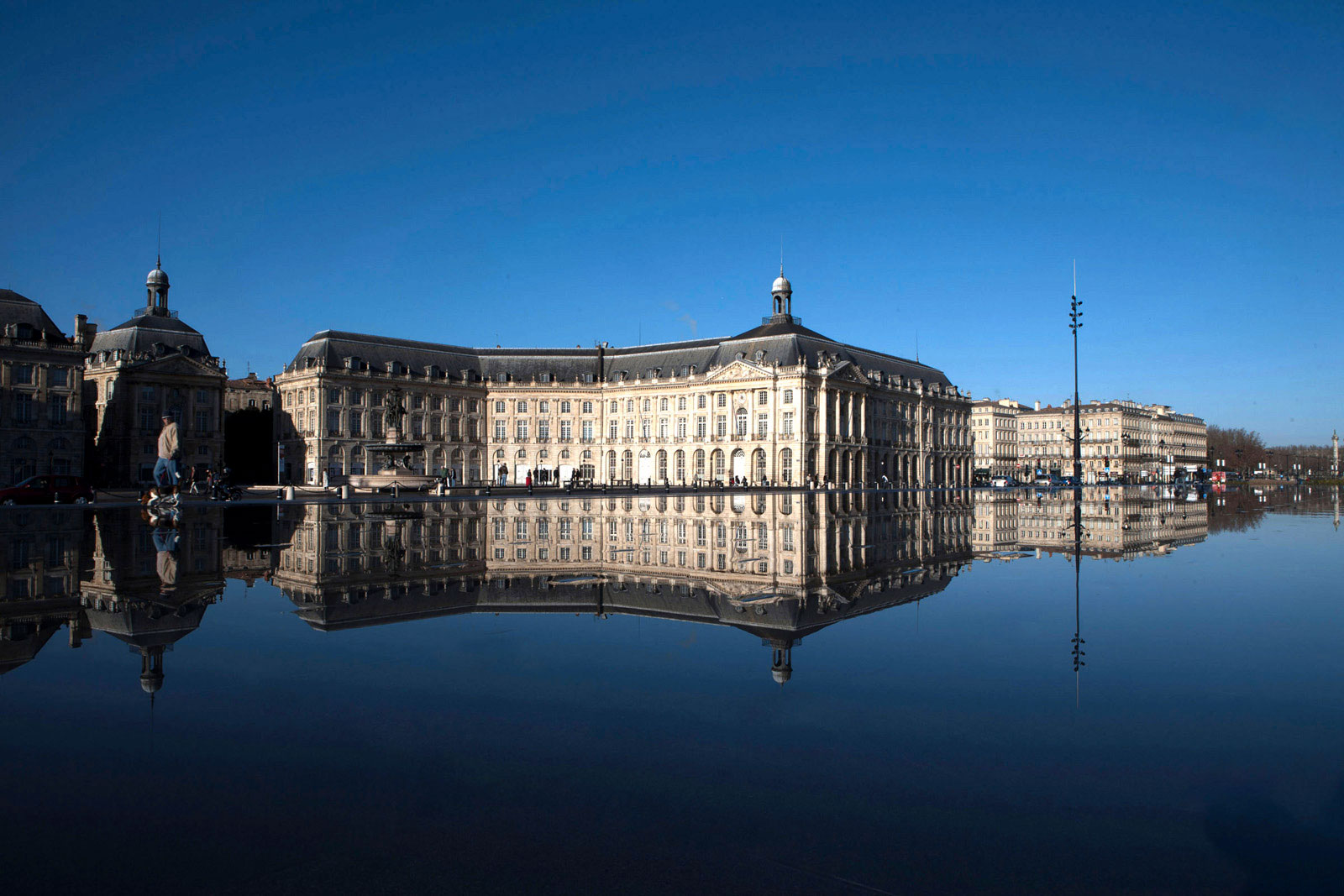 With magnificent eighteenth-century façades in perfect patrimonial unity, the Bordeaux quays are listed as World Heritage by UNESCO.

The Grosse Cloche de Bordeaux was formerly the belfry of the town hall, with the Cailhau gate it is one of the few monuments of the Middle Ages that the city has preserved. Built in the fifteenth century, magistrates used to ring the bell to announce the start of the harvest or to raise the alarm in case of fire. 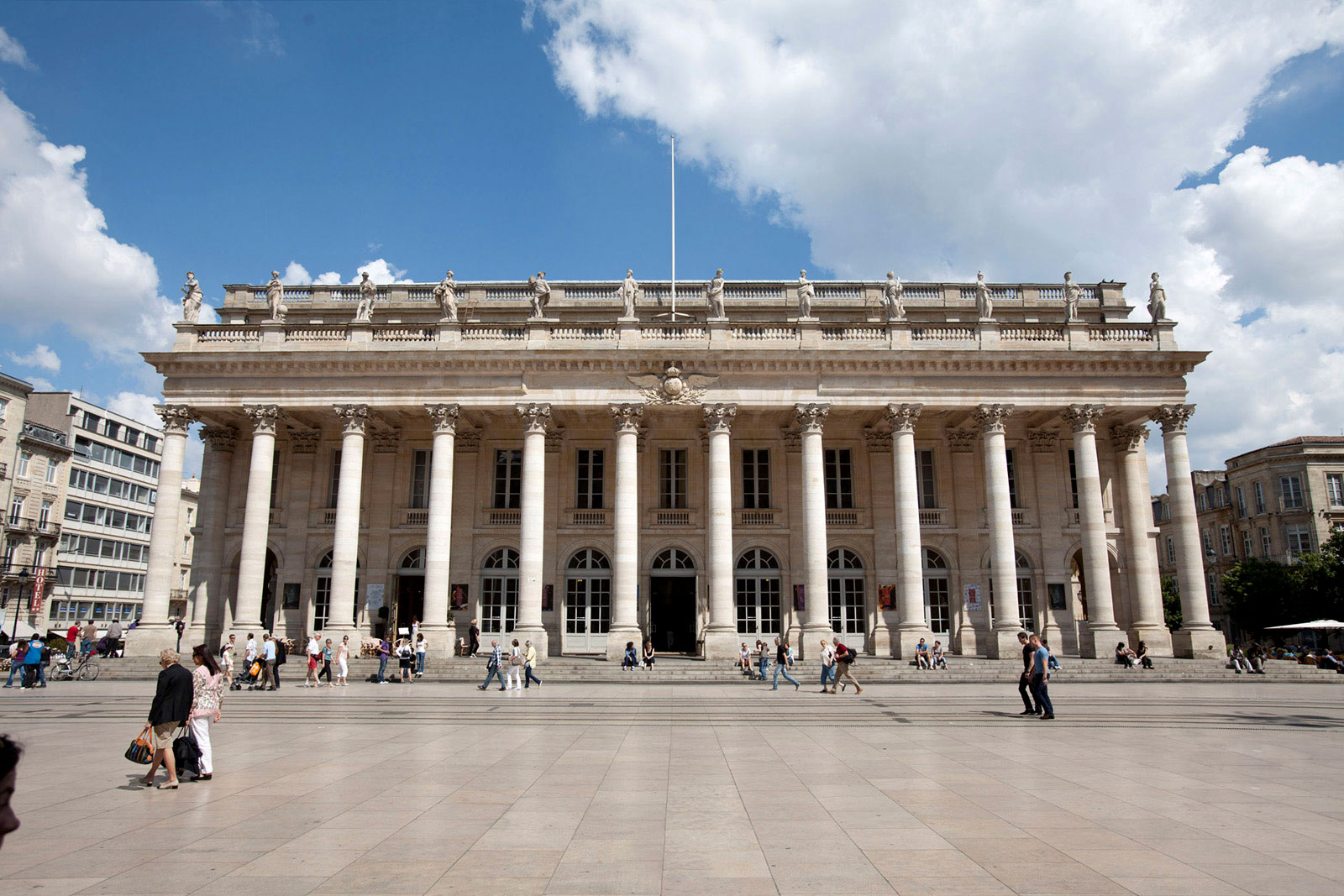 The Grand Théâtre de Bordeaux was commissioned by Marshal Richelieu, governor of Guyenne and was built by the architect Victor Louis in 1780. The first play that was performed was Jean Racine's Athalie.

The monument of the Girondins or column of Girondins was built between 1894 and 1902 by the statuary Achille Dumilâtre and the architect Deverin, in memory of the Girondins deputies victims of the Terror (the French Revolution). 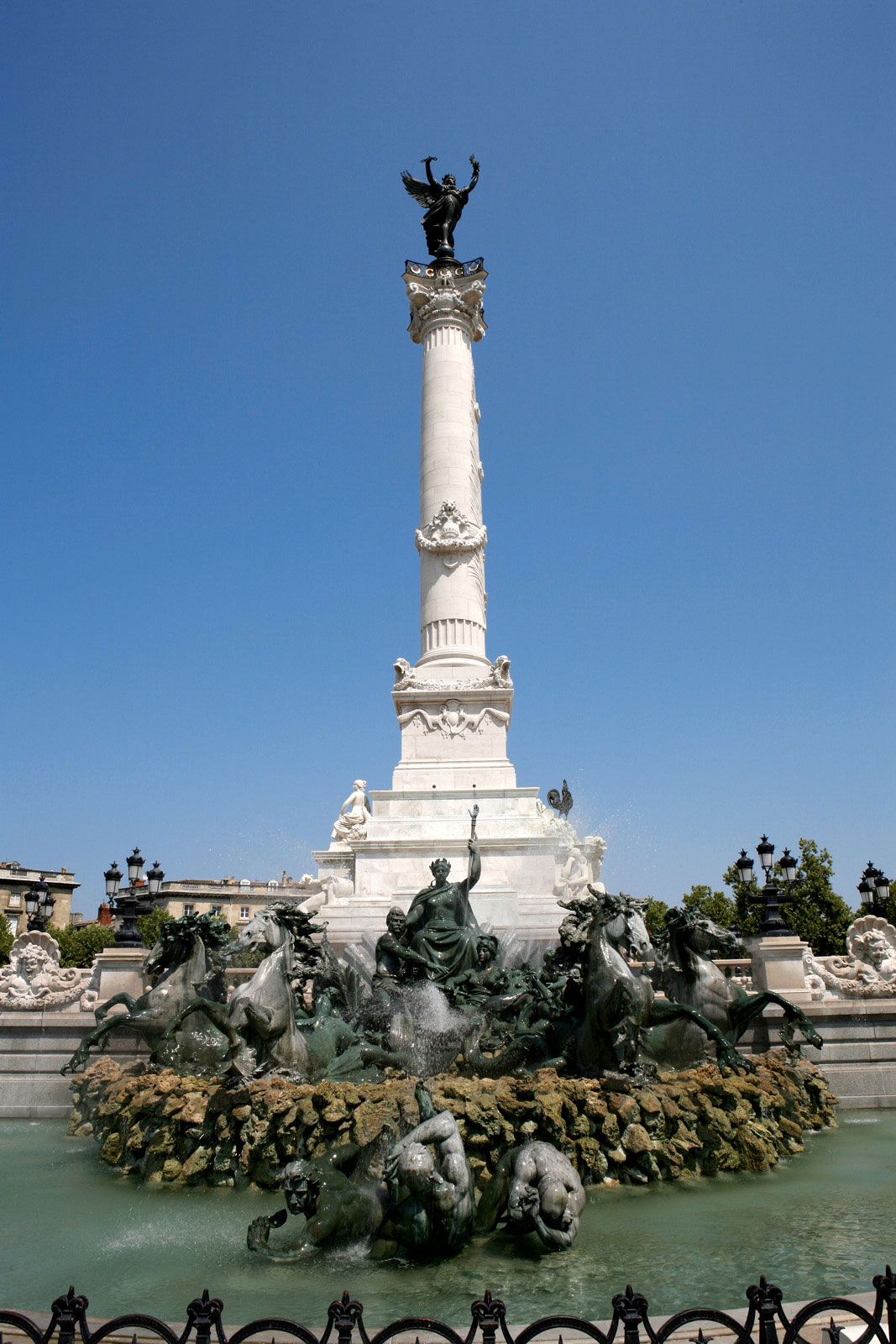 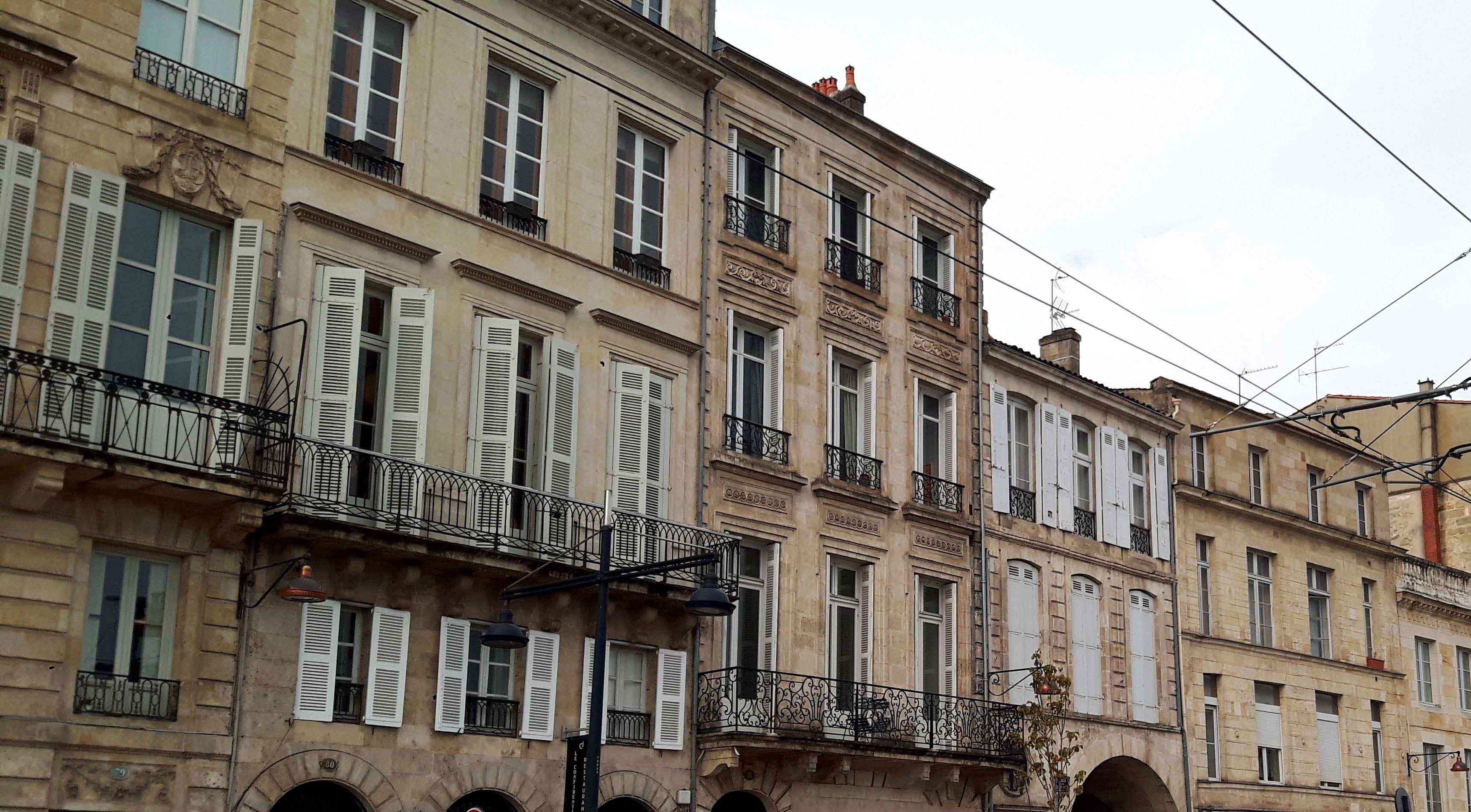 The name of the district Chartrons comes from a convent of brothers Chartreux built from in 1381. The suburbs then developed around the monastery, the development of this area of Bordeaux was done by English merchants, Flemish and Irish. It was therefore natural that this district became the stronghold of brokers and wine merchants.

In order to replace the ramparts, Intendant Tourny decided to close the city with squares decorated with doors (Cailhau, Burgundy, Aquitaine, Dijeaux etc ..). The Burgundy Gate was erected in the eighteenth century (1750-1755) in honor of the Duke of Burgundy. 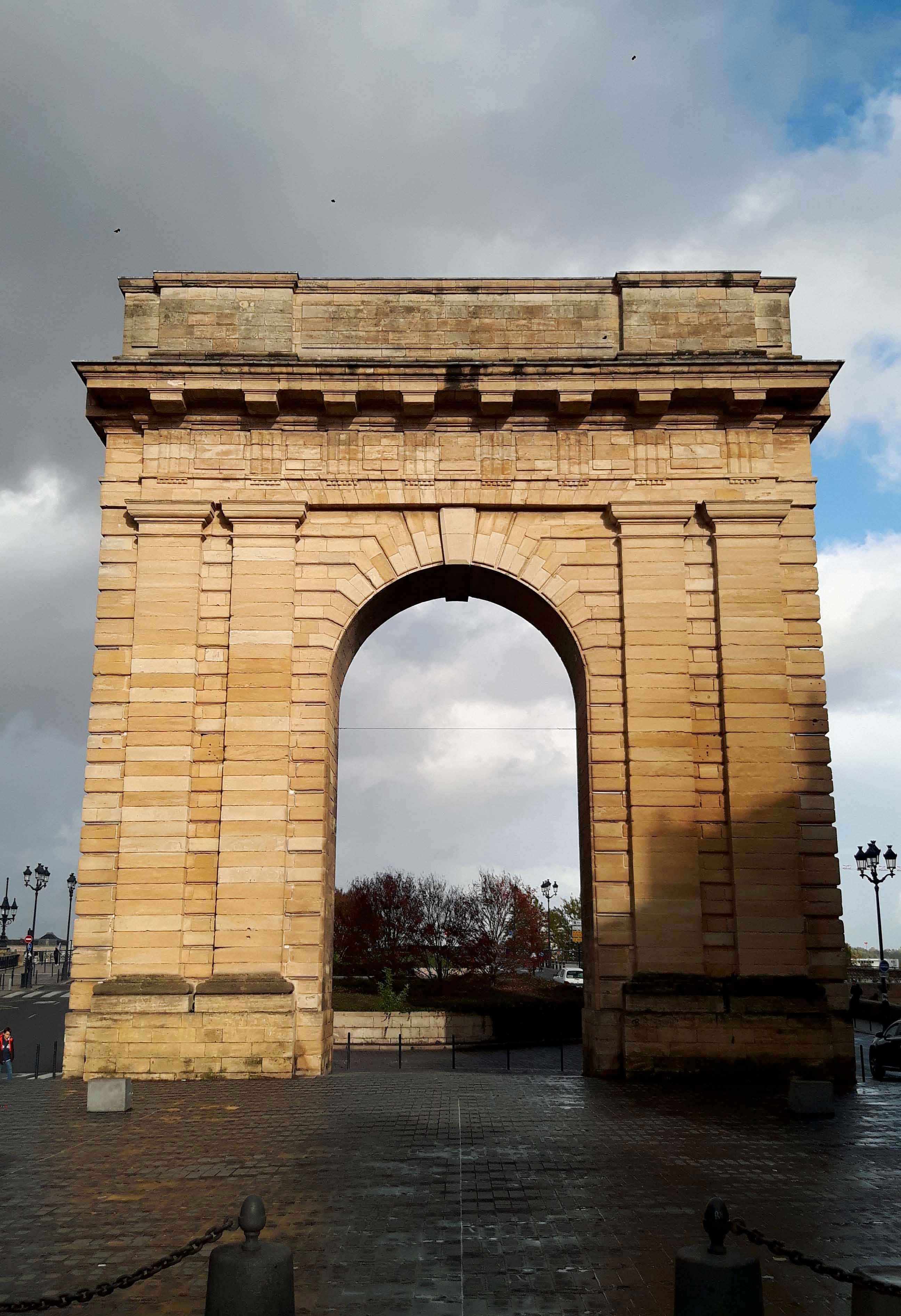 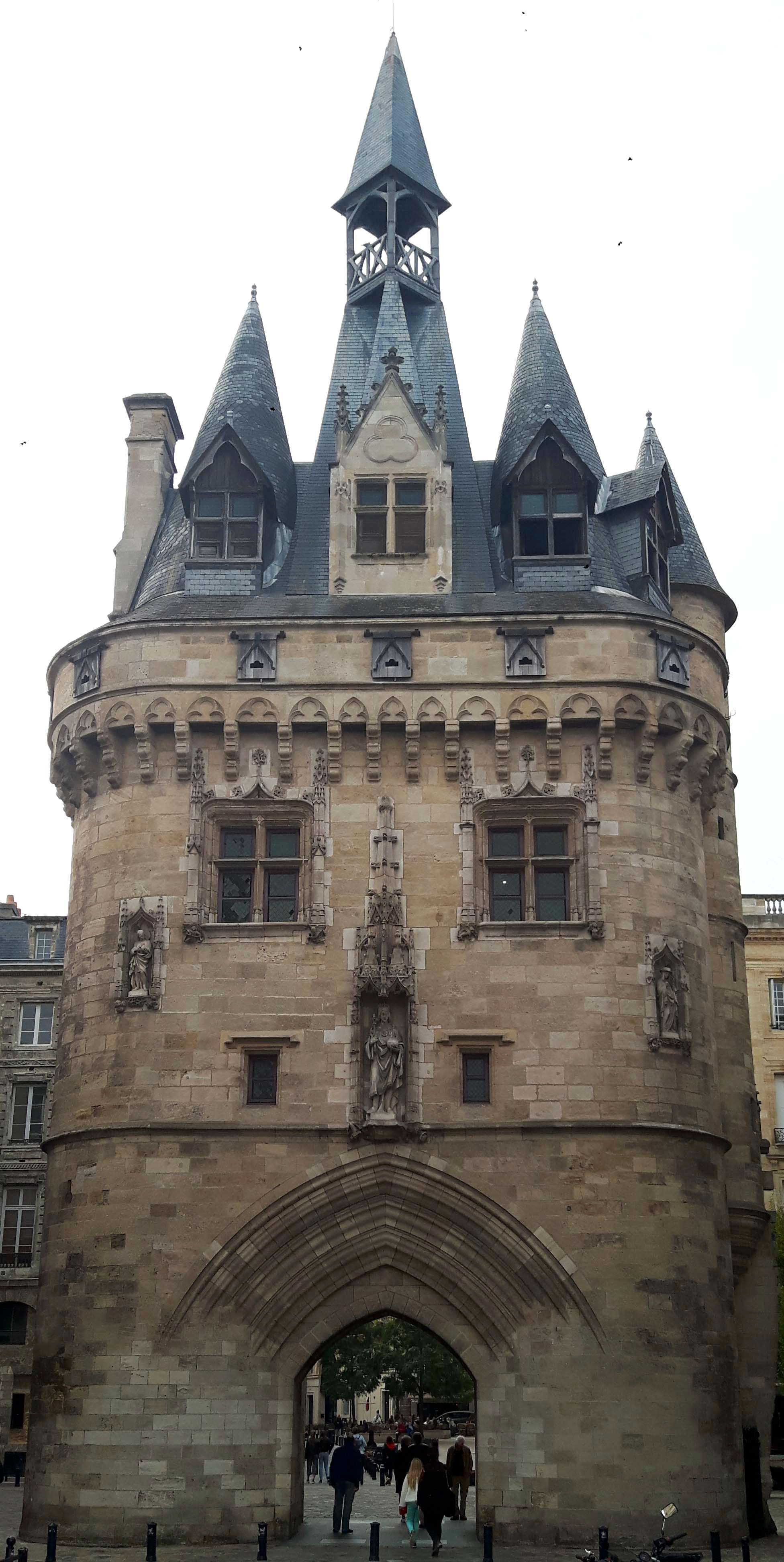 The door of the Palace (porta deu Calhau in 1450) or door Cailhau is located at the mouth of the 2 main rivers of Bordeaux. The original gate was implanted in the wall of the fourteenth century, it was replaced by the current monument built between 1493 and 1496.

The door of the Palace (porta deu Calhau in 1450) or door Cailhau is located at the mouth of the 2 main rivers of Bordeaux. The original gate was implanted in the wall of the fourteenth century, it was replaced by the current monument built between 1493 and 1496. 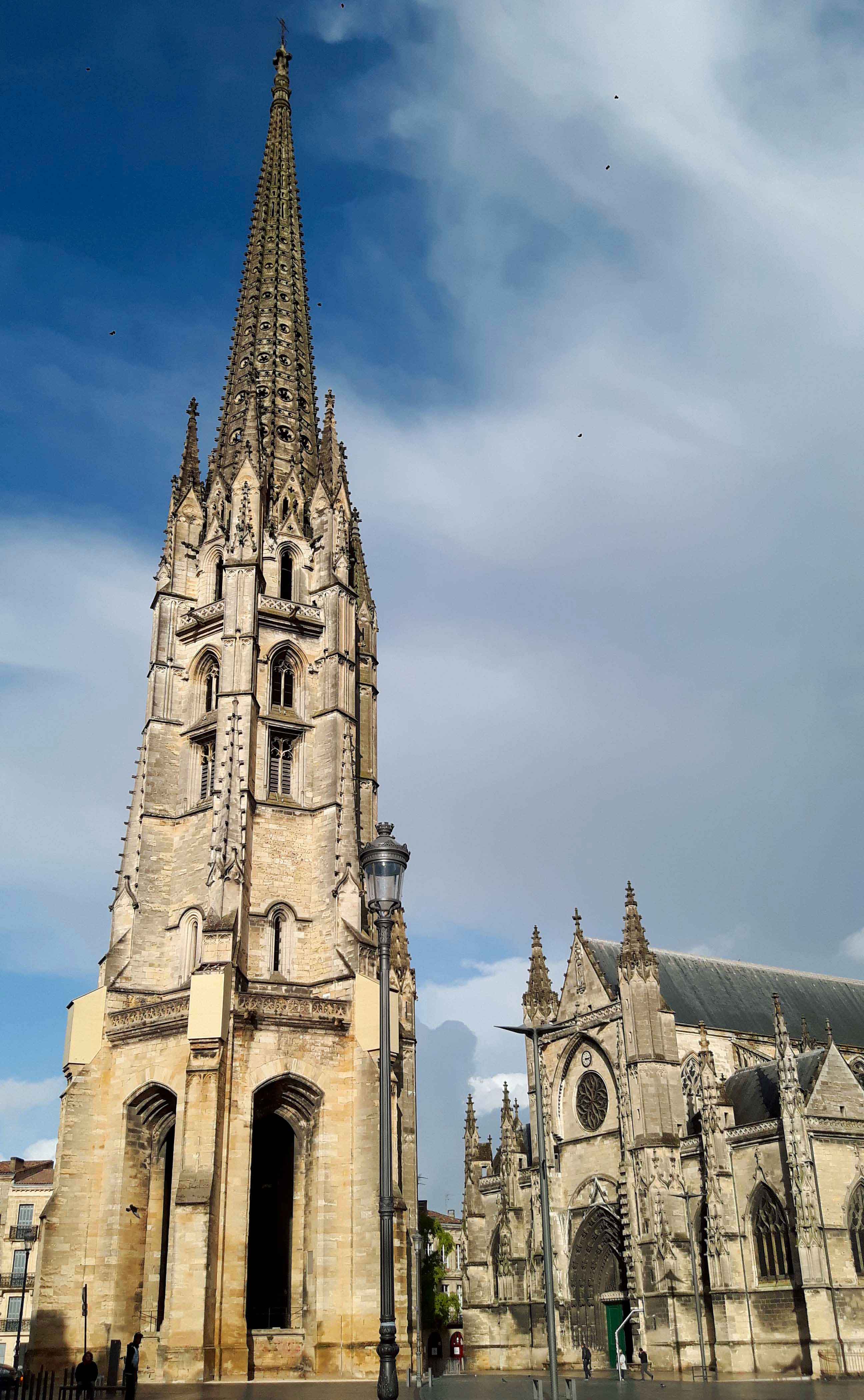 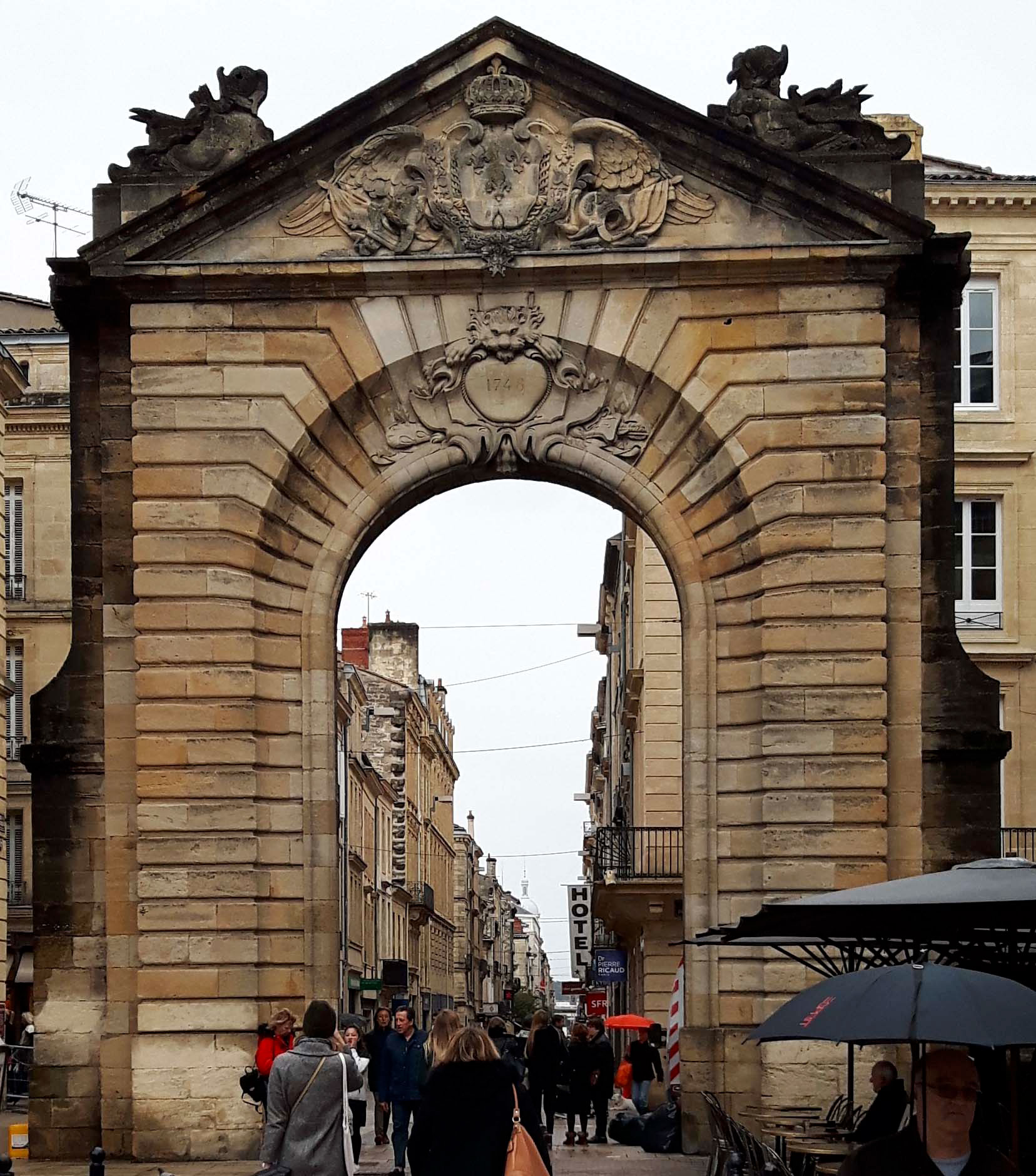 Also known as Porte Dauphine, the Dijeaux gate was an entrance to the west of the city. The present monument was erected in between 1748 and 1753 by Voisin.